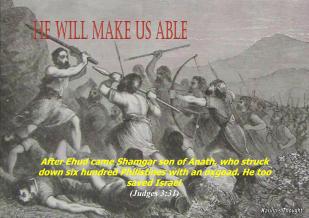 If we read the Bible we will find so many great Bible figure such as Moses, David, Abraham, Paul and many other great names who has been known very well. But beside those great names, there is a Bible figure that makes me interested and I have learned something from him. He is Shamgar. Shamgar is not as popular as David and other great name. Shamgar’s name just mentioned two times in the Bible. First in Judges 3:31 and the second are in Judges 5:6. What is the interesting thing from this figure? Let’s take a look at this verse:

After Ehud came Shamgar son of Anath, who struck down six hundred Philistines with an oxgoad. He too saved Israel. (Judges 3:31)

Shamgar be able to defeat six hundreds Philistines only by using an ox goad. This was unbelievable! I remembered one Hollywood action movie titled “Rambo” A hero who could strike down hundreds enemies alone. But what I saw in that movie is only fictional. Not a true story. Shamgar’s story is the real one. True story!

Actually, who is Shamgar? Unfortunately we could not dig up much about the background of the Shamgar. Shamgar is Anath’s son. He lived in the era after Ehud successfully defeated the Moabites and make Israel safely along 80 years. But after that Israel should face the Philistines and at that time, Shamgar appeared to resolve the situation, dispel, and killed six hundreds Philistines.The Question is, what does makes Shamgar be able to beat them all just by using an ox goad? When I ponder it, I found the answer. I do believe that it all happened just because God’s help! Shamgar believe that God will be with. He is ready to go beat his enemies and amazingly he won the battle against the Philistines. He has saved the Israelites from destruction.

My dear friends, whether we realize that in our lives we also striving and battling every day? Not against the human but against the Satan! Satan is never sleep and silent. He keeps trying to mislead and destroy us. We also never stop strive facing any kind of problems, difficulties, and challenges. Oftentimes we felt that our lives are so hard and we are thinking that we face something impossible to overcome. We are also felt that we don’t have power and ability to conquer all of the problems. But as Christians, there is something that we should always remember that before God the words of: Amazing, astonishing or miraculous are not something new anymore. There are so many stories in the Bible that show us God did many unbelievable things through His chosen people. He shows us that He can bowl over human logic with His miracle series. Jesus said:

There is nothing impossible before God. Though six hundreds problems and obstacles trying to hit us, we will defeat it all as long as we trust and totally rely on God’s power. Though we feel weak and don’t have ability, God will use and enable us to overcome all problems and we will win in the life’s battle. I was remembering when I was promoted to replace my father position in the company. Some people doubted my ability as a new leader. Even someone cynically said,” Karina is a young spoiled girl who just saw the sun yesterday. She by no means has experience in running a company. She doesn’t even know how cruel and hard the business world. She doesn’t know how to make money in business, but she does know every well how to spend the money”. At that time, I was just thinking that the promotion is not only a part of my parent’s plan but I even do believe that is a part of God’s plan for my life. If so, firmly I also do believe that God will enable me to replace my father position and be able to run their company as long I trust to God and not counting on my own strength. I was remembering Jeremiah’s story when God call him. These verses greatly strengthen me and convince me not to be afraid and discouraged:

“Alas, Sovereign LORD,” I said, “I do not know how to speak; I am too young.” But the LORD said to me, “Do not say, ‘I am too young.’ You must go to everyone I send you to and say whatever I command you. Do not be afraid of them, for I am with you and will rescue you,” declares the LORD. (Jeremiah 1:6-8)

If we dig deeper to the Holly Bible, many times God show us that there is nothing impossible and can be to do miraculous things through those people who chosen by God. Let’s see who is chosen to beat Goliath. A mighty warlord? No! God chose a young David (1Samuel 17:42). Another example, let’s take a look to the story of Gideon (Judges 7). How God commanded Gideon to summon up three hundreds troops only to face the Midianites and Amalekites which described like grasshoppers for multitude and their camel as the sand by the sea side for multitude. (Judges 7:12). There are so many miraculous story in the Bible that could underlie us to be able perform as a winner in overcome various problems and challenges even which seemingly impossible.

My lovely readers, we may not a super hero, we may just unknown ordinary person, maybe we are too young among the elderly, and they are look down and dubious to our ability. I would like to say something: Please don’t be discourage or feeling useless. Because God can use and turn us become an extraordinary person and be able doing miracle things. Shamgar is not a famous figure but God use him amazingly to do unbelievable thing. David just a young shepherd but he successfully beat goliath only by using stones and a slingshot. The point is, trust and totally rely on God’s strength. We have to trust that God knows and pleased to His children who love and trust in Him. Through us God will use various miracle things to declare His existence. God can use anyone to show His mightiness and sovereignty. Even God can use the weak and foolish people if He pleases.

Besides from many other great Bible figure, this evening I encourage you to also learn from Shamgar’s story. We learn how God’s power works on ordinary people to be able to do miracle things. Through His chosen people God can turn impossible thing to be possible. God can turn illogical thing become logical. We learn to always put our faith on God’s strength rather than on ingenuity and human logic.

so that your faith might not rest on human wisdom, but on God’s power. (1Corinthians 2:5)

This time if we are struggling so hard to face so many trials and challenges, don’t worry and don’t feel discouraged. Once again Trust Him! Leaning and relying on God mightiness. Ask Him through prayer so that we are enabled and given the strength. He will make us able. Amen.

78 thoughts on “He Will Make Us Able”