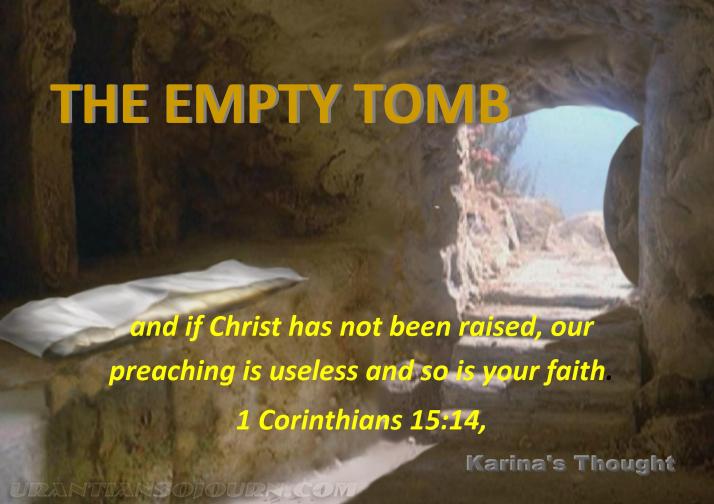 Hi all! In the next few days we will celebrate Jesus’ resurrection day. Honestly, toward to the Passover day sometimes I feel a bit sad and emotional because I still heard question like, “Is it true that Jesus has risen?” It could be normal if the question comes out from the unbelievers, but I really don’t understand when that question came out from people who have lived in Christ. It’s a very sad and weird reality! However, it’s okay! I’m trying to understand and accept this reality. I know that Jesus’ resurrection story has been a debate and causing the occurrence of pros and cons. Not only today, people who lived in Jesus’ time also didn’t believe or doubt; even worse some Jesus’ disciples also too (Matthew 28: 16-17)

Therefore, I’m longing to write about the facts of Jesus ‘resurrection. This post just a reminder that Jesus has really risen! I’m interested to choose Jesus’ tomb as a topic of this post. In my opinion the empty tomb was a starting point of the entire Jesus’ resurrection story. All things that happened in the tomb and the existence of tomb itself became a controversial story throughout the human life history and will goes on. Many people scientifically strongly objected to all things that happened in the tomb. They claim that it was only a legend or myth development created by Jesus’ disciples and followers. Some other argued it just an apologetics device rather than a historical fact that can be accounted for. The extreme opinion was said that Jesus actually never arose but His disciples stole Jesus’ body. Now, let’s take a look in detail what happened at the Jesus’ tomb.

The Angel of the Lord

The moment of Jesus’ resurrection begins with an amazing event. Along with a violent earthquake, The Lord’s angels with white clothes like a snow and appeared like a lightning came down from the Heaven, then rolled a multi-tons stone back at the entrance of the tomb then sat on it. (Matthew 28: 1-4) Oh, I imagine how wonderful the moment was. The angel sat on the stone was showing the magnificent of Jesus’ resurrection power and symbolized a glorious triumph over the death and sepulcher! Then the angel said to Mary Magdalene and other Mary who at the dawn went to look at the tomb,

“Do not be afraid, for I know that you are looking for Jesus, who was crucified. “He is not here, He has risen, just as he said… (Matthew 28:5)

I took time for a while pondering this word then I tried to put myself as Mary Magdalene. When I heard the word, “He has risen, just as He said…” I am very sure the Angel not trying to delude me and there’s no more reason for me to not believe the angel’s words. The angel’s remarks has been totally become a very strong proof that Jesus has risen. The Angel wasn’t made up a fish story! Angels are the God’s messengers! They never lie! At the time, the angel was telling a thing that Jesus had said before (Just as he said…) but to convincing both of the women, the angle asked them to get into the tomb and showed where Jesus lay. The Angel said, Come and see the place where he lay” (Matthew 28:6) A statement will be more credible if accompanied with authentic proof and at the time the angel gave an authentic, undeniable, and undoubted proof. The both of women didn’t see Jesus’ body. They simply found the neat grave clothes! After that the Angel told to the women tell to the Jesus’ disciples Jesus has risen from the dead and will see Jesus in Galilee (Matthew 28:7)

My beloved readers, there was interesting thing in Jesus’ resurrection story and it becomes another absolute proof of Jesus’ resurrection. Titus Flavius Josephus, a Jewish historian, says that women weren’t even permitted to serve as witnesses in a Jewish court of law. But at the time, the fact was, the women, Mary Magdalene and the other Mary was mentioned and included as the first and main witnesses. I quote a comment of William Lane Craig about this matter; the discovery of the tomb by women is highly probable… Why women and not the male disciples were made discoverers of the empty tomb is that women were in fact the one who made this discovery. If I may conclude, the women, regardless of their status in Jewish society, were a part of grand design of Jesus’ resurrection story. The women had been plotted like that way. So if there’s an objection about women as witnesses, it doesn’t matter! Who cares! Jesus’ resurrection wasn’t a case in the court of law but a part of fulfillment of God’s promise. The happened fact the women found the empty tomb, they tell men (the disciples), the men made verification, and then they spread the word. It means the truth of the women’s testimony can be accounted for. So once again I think the idea of Jesus’ resurrection was only a legend created by Jesus’ followers is a very unreasonable idea. An event that involving trusted witnesses (though women) and someone else trust it cannot be called as legend or hoax!

Now let’s look to the tomb itself. There were so many disclosed theories to break the fact and truths of Jesus’ resurrection. There was a theory said that the Jesus’ tomb site was unknown. Well you know this theory made me take a deep breath and felt really confused. The Jesus’ tomb was unknown? I think this’s (I’m sorry to say) the dumbest theory ever revealed. I’ve no idea at all why they can make this stupid theory. I think the theorists had forgotten three important fact that written in the Bible. First, the brand new, hewn out of solid rock tomb was owned by the rich man from Arimathea named Joseph a member of supreme council of the Jewish (Sanhedrin) who asked Pilate to take Jesus’ body for burial (Matthew 27: 57-60) the second thing, at the time, Mary Magdalene and the other Mary also were there (Matthew 27:61) And later after three days, those women went back to the same and exact location, as did the disciples who ran to see it by themselves when hearing from the women that the tomb was empty. The third, because of the concern that Jesus’ body will be stolen by Jesus’ disciples, then the leaders of the Jewish priest took extra precautions (Matthew 27:65). They ensured that Jesus’ tomb was guarded by groups of highly trained Roman soldiers with very strict rules. So I think those who made this theory weren’t smart enough made a theory! Joseph of Arimathea, Mary Magdalene and other Mary, the Roman soldiers, they all knew where the exact location of Jesus’ tomb! I’ve personal opinion about the tomb. Though until now still a debate about the precise location of the tomb, it doesn’t matter! For me personally, the reason why Jesus dead, it does matter!

Beside guarded by highly trained soldiers, Jesus’ tombs was also sealed with Roman seal. A seal represented the power and authority of the Roman Empire. Break the seal means dead! And the ruthlessness of Roman soldiers was well-known and feared so there was no one dares to break the tomb that automatically break the seal, and steal Jesus ‘body even by Jesus’ disciples! Actually, Jesus’ crucifixion made the disciples confused, afraid, and most of them were hiding. Even Peter, who swore he willing to die for Jesus, denied Jesus three times before the crucifixion!

There was unusual thing in the tomb. When the women and other people were approaching the tomb in the morning they found the unusual position of the rolled stone. To explain the stone position, Mark, in his gospel mentioned “Anakulio” from the root “Kulio” which mean “roll” So “Anakulio” (with preposition “Ana” means “to roll up a slope or an incline” I imagine something about this stone. It’s not too difficult a small number of men put the stone weighing one to two tons in place because typically the place in front of the tomb was sloped down. But isn’t so easy for a few men to roll the stone uphill to the slope. The unusual position of the rolled stone was another proof that Jesus’ body wasn’t stolen even by the disciples. It was so impossible for a few men roll the stone away secretly without being noticed by the Roman soldiers. Moreover, the tomb was guarded all the time. Periodically the guard would be exchanged.

My dear readers, after we’re reminded again by six important facts in the Jesus’ tomb that I submit in this post, I hope and pray there’s no more doubt in our heart and mind about the facts of Jesus’ resurrection and stop wasting our time and energy to think unneeded thing about Jesus’ resurrection. All theological facts have been completely written in the Bible even written by four apostles. Trustable and credible historical facts also have been found. Now is just a matter of our faith! Jesus’ resurrection among the dead is a foundation of Christian faith. It’s written in 1 Corinthians 15:14,

and if Christ has not been raised, our preaching is useless and so is your faith.

The resurrection of Christ made the apostles’ faith drastically growing so they were daring to proclaim the God’s word and they were willing to be martyr. Jesus’ resurrection was becoming a revival of their faith. I also earnestly pray what has happened to Jesus’ disciples at the time also happens to us. Maybe we don’t have to be martyr but we’re experiencing a resurrection of faith. Our faith becomes stronger in waiting for the next fulfillment of God’s prophecies and promises, and by faith keeps watch until His second coming.

Therefore keep watch, because you do not know on what day your Lord will come.” (Matthew 24:42)

And by the firm faith we’ve great longing to spread the truth of God’s word to all people especially to unbelievers so they repent, believe, be saved, and they become disciples of God, as Jesus commanded to us,

Therefore go and make disciples of all nations, baptizing them in the name of the Father and of the Son and of the Holy Spirit. (Matthew 28:19)

Happy resurrection day from me, my husband Kevin, and Andrew! God Bless!

Special thanks to Sister Sella Irene for the great suggestions