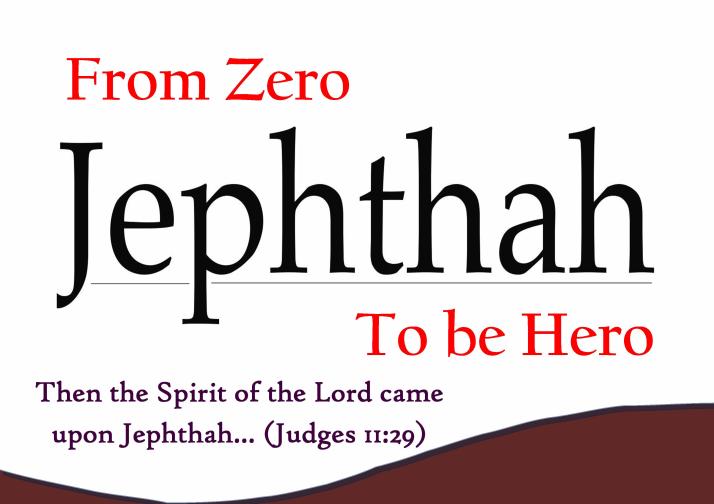 Few days ago I took time to meet my new office staff in Singapore named Zahra. She is from India then move to Singapore to get a better future. I am interested and impressed by her life background. Openly and shamelessly she tells her life bitterness. When she was 22 year old she should know a bad fact. She was an unwanted child to be born. She was born as a result of the adultery. Her parents many times tried to have an abortion yet always failed. As an unwanted child she never gets a proper affection, even handed out to one of her mother’s relatives.  That situation gives rise to hatred and rancor to her parents. But Thank you to God, the good news was she bring her bitterness to God and God enabled, strengthen, and move her heart to forgive them, even God amazingly use her in a ministry at her church in India.

My beloved readers, after I heard her touching testimony, my mind soon drifted to the one biblical figure named Jephthah that experienced the similar thing.  Jephthah’s story was written in Judges 11. Jephthah was “From zero to hero” From nothing to be something. He was born as an illegitimate child, the result of adultery relationship with a harlot. The Jephthah’s story begins with a very contrast fact.

Now Jephthah the Gileadite was a mighty man of valor, but he was the son of a harlot; and Gilead begot Jephthah. (Judges 11:1)

Jephthah portrayed as a man that have two life’s side. On the one side he pictured as illegitimate child of a whore and rejected by his society, but on the other side he considered as  mighty man. The author of Hebrew even classifies Jephthah as a hero of faith in line with David, Samuel, Gideon, Samson, and Barak.

… For the time would fail me to tell of Gideon and Barak and Samson and Jephthah, also of David and Samuel and the prophets:  who through faith subdued kingdoms, worked righteousness, obtained promises, stopped the mouths of lions, quenched the violence of fire, escaped the edge of the sword, out of weakness were made strong, became valiant in battle, turned to flight the armies of the aliens. (Hebrews 11:32-34)

As an unwanted and illegitimate child, he then expelled by his parents. “…You shall have no inheritance in our father’s house, for you are the son of another woman.” (Judges 11:2)

Then Jephthah who had been born in the unpleasant conditions must also bear the burden of which is not due to his fault. He wasted; bear hatred whole families and even his own nation as a result of his father’s deeds that should not be inflicted on him. What happens next? Because of all that, Jephthah then fled from his families, went to the land of Tob, and joined to the raider gangs. This is the life he should  bear as a result of his father’s sins. Life is so bitter, but nevertheless he continued to live.

The story continues. At one time, there was an attack against Israel carried out by the Ammonites. The Israelites was threatened and frightened. Apparently this fear makes the elders of Gilead no longer had embarrassed to pick Jephthah and asked him to become their commander to fight the Ammonites.

“Did you not hate me, and expel me from my father’s house? Why have you come to me now when you are in distress?”  Said Jephthah to the elders of Gilead.(Judges 11:7)

My dear friends,  there are many valuable  and important things we can learn from Jephthah’s story . Let’s see the first thing. It is about forgiveness.Though Jephthah had hated and expelled from his father’s house, Jephthah was a figure who had Magnanimity. He was a figure that full of forgiveness and didn’t hold grudges. He didn’t  intend at all to take revenge to the elders of Gilead who hate and reject him;  although Jephthah could, he didn’t  take advantage of the situation to hit back them. Jephthah was already implementing what has been commanded by God:

You shall not take vengeance, nor bear any grudge against the children of your people, but you shall love your neighbor as yourself… (Leviticus 19:18)

The Bible noted clearly what he did at the time: Then Jephthah went with the elders of Gilead, and the people made him head and commander over them… (Judges 11:11)

One question to ponder, if one day people who have hurt and hate us come to apologize for everything they did and ask us for help, what would we do to them? Take revenge and hit them back? Could we act like Jephthah with open arms we accept them with love and forgiveness and help them?  I really realize forgive someone that has been hurt us so bad is a difficult thing to do. But today let’s learn from Jephthah as a figure that have full forgiveness and as God also commanded us:

Let all bitterness, wrath, anger, clamor, and evil speaking be put away from you, with all malice. And be kind to one another, tenderhearted, forgiving one another, even as God in Christ forgave you. (Ephesians 4:31-32)

“For if you forgive men their trespasses, your heavenly Father will also forgive you. (Matthew 6:14)

The second thing we can learn is, let’s put our focus on the underline words below,

“If you take me back home to fight against the people of Ammon, and the Lord delivers them to me, shall I be your head” (Judges 11: 9)

This shows us that although Jepthah was living in the tough world and full of evil, he still had a good relationship with God and He had faith in God. He didn’t say “if I defeat the Ammonites…” but he said “if the Lord delivers them to me…” He realized that if he managed to defeat the Ammonites it all not because of his own strength and ability but it all just because God gives victory to him. Also, though his life was filled with a myriad of pain and suffering, He was a figure who completely surrenders to God. Jephthah continues to rely on God incessantly. Jephthah brought the entire case to the presence of God.

and Jephthah spoke all his words before the Lord in Mizpah. (Judges 11:11)

Fear not, for I am with you; Be not dismayed, for I am your God. I will strengthen you, Yes, I will help you, I will uphold you with My righteous right hand.’ (Isaiah 41:10)

The third, through the story of Jephthah we could see that God didn’t see the good and bad of someone life background for His work. Jephthah who was born with a bad background has received God’s grace in abundance. Even the God’s Spirit came upon him.

Then the Spirit of the Lord came upon Jephthah… (Judges 11:29)

God doesn’t look at whoever we are, where we came from, and how is our past.  Jephthah’s Bitterness can be transformed by God when he brought his case before the Lord. Though he lives among the raider gangs even become a leader, but the Lord chose him to be a war commander of Israel.  Here we could learn that a wasted and unwanted people will not forever waste and not appreciated. God can choose anyone no matter who they are for His Kingdom work. God’s word said:

The fourth thing, I found an interesting thing from Jephthah’story. Despite he was in very taugh and hard situation, Yefta was able to explore and found his potential.What kind of potential? The leadership! He said:

“If you take me back home to fight against the people of Ammon, and the Lord delivers them to me, shall I be your head?” (Judges 11: 9)

It was true Jephthah was a leader of raider gangs but God even use his leadership ability become a war commander against the Ammonites. I personally learn something, although we have dark background, rejected, and experienced many bitterness of life, God still bless us a potential and gift to develop ourselves to become someone usefull for others. I do believe at the time Jephthah realized his potential and ability as a head. If not, he will not confidently say: “Shall I be your head. No matter who we are, God has given each of us grace, gift, and self-potential that can be developed, as written in Romans 12:6-8:

Having then gifts differing according to the grace that is given to us, let us use them: if prophecy, let us prophesy in proportion to our faith; or ministry, let us use it in our ministering; he who teaches, in teaching; he who exhorts, in exhortation; he who gives, with liberality; he who leads, with diligence; he who shows mercy, with cheerfulness.

My beloved brother and sister in Christ, this evening allow me to encourage all of us to learn from Jephthah’s life.  Let us learn to become a person who always forgive those who may have been hurt and hate us. Let us always rely on God and cast all worries, problems, trials before the Lord. Let’s more realize that God can use anyone for his work. God can use someone who have dark background of life to declare His glory and mightiness. Never stop to explore our sel-potensial because the Lord has blessed us with talents and abilities that can be used by God to do good for others. Let’s always remember that God can change anyone “From zero to be Hero”, “From nothing to be something” Amen

84 thoughts on “Jephthah, From zero to be Hero”