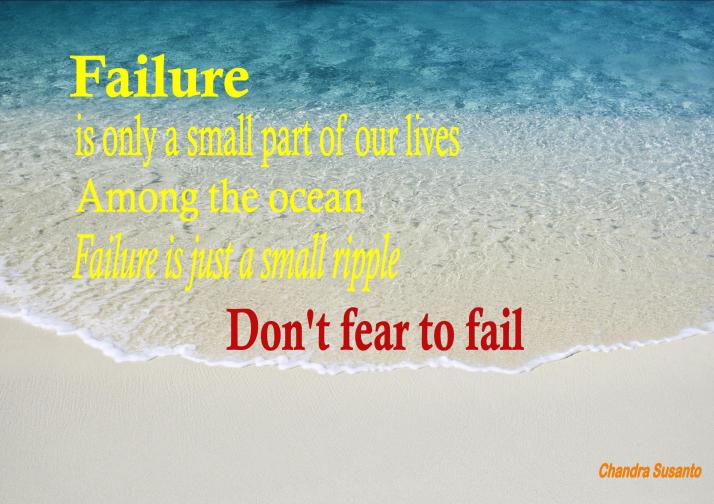 Hello dear readers, how’s you going? I hope and pray everything is okay with all you. My post this time is a re-post from my old post in July 2013. I deliberately re-post because a few days ago a friend of mine shared his problem because in pioneering his own business, he experienced fails many times and it made him get frustrated. I am trying to encourage him to not being frustrated and give him some suggestion to avoid failures in the future. I hope and pray this re-post could strengthen all of us especially when we have to face failure.

This morning I was startled by a letter from our marketing director. Through my secretary, she was handed a resignation letter. I was surprised because I did not hear rumor about this resignation. I immediately asked him to come to meet me.

“What is this?”  I began the conversation seriously. “Yes. I am sorry ma’am. That is my resignation letter. I intend to resign from this company” He replied with a bit hesitant. “Ok. Give me a good a reasonable reason.  So far I have not seen obvious reason to this resignation. Please explain to me” Then he gave me an explanations.

The point is, He felt he had failed to lead his division in order to increase the level of sales of the company. This case relates with our last meeting whereby company profit does not achieve the target. According to him the profit target is not reached due to insufficient sales. He said: “Ma’am, because I’ve failed and I have a moral responsibility to the company, I think it would be better to resign.

Then I said firmly: “Ok! I’ll give you an answer about your resignation right now! My answer is No! As a top leader in this company, I reject this resignation letter.”

He surprised. I said to him: “with all due respect, please show me who the people in this world who have never experienced failure in their life. Could you show it? You might see I and my family have never experienced failure. No! You are wrong. We have experienced the failures. We had ever collapsed, even living in the failure. Every people in this world must have experienced a failure no matter big or small failures. You may see the others boards never failed in this company. But remember, they might experience on the other side of their life.”

My dear friends, the story above represent that many people often see a failure is the end of everything. They saw the failure as the scariest things in their lives. I have a simple opinion about a failure. In our lives sometimes we need failure. A failure is not represent our ignorance or inability. In fact, failure is a best way to know our weaknesses and lack. Failure is a best teacher that we can learn more from it.

“For though the righteous fall seven times, they rise again, but the wicked stumble when calamity strikes.”

“He gives strength to the weary and increases the power of the weak”.

Failure is a step to success. It makes us wiser and mature. Do not ever be afraid with a failure and never give up but we do not do something that has a big chance to fail. Like my father always said: “failure is only a small part of our lives. Among the ocean failure is just a small ripple.

Finally, after quite long conversation, I said to the director: “Please do not ever run away from failure. Face and accept it! If the company assess you has been fail, then the company itself will ask you to resign. If you say you have a moral responsibility to this company, do not leave it. Do the best for all of us with your moral responsibility. Our company still running well, until this time the board of commissioner still satisfied with our performance. It means, I do not see any a failure in every part of this company. Including you! This company still needs you.”

As believers, we have to look at failure with positive lens. So, we become optimistic and bold make changes for the betterment of us. Try and fail much better than as though has never failed because it does not dare to take a risk to try. Don’t fear to fail! Amen

“I never failed once. It just happened to be a 2000-step process” Thomas Alfa Edison

“Failure is only a small part on our lives. Among the ocean, failure is just a small ripple. Don’t fear to fail” Chandra Susanto