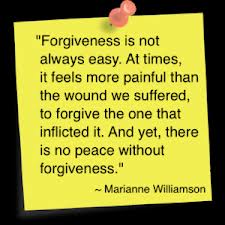 In the real life often it is hard to forgive someone who has hurt us. On this Sunday I heard a sermon that talks about forgiveness and once again through the sermon I reprimanded. Right now, Ihave a longingtoshare withallfriends. And here’s the summary…

There is no more important characteristic found in the human heart than forgiveness. It’s importance is seen in the home, church, community and nation. Someone has said there are “three kindred spirits in the heart — giving, thanksgiving and forgiving. Usually where one is found, all are found.” A forgiving heart is an essential quality every child of God should have (Eph. 4:32).

Reasons to Be Forgiving

God commands it (Mark 11:25). This should be sufficient reason for any right-thinking person to be forgiving because God’s promises rest upon obedience to His word. But forgiveness on mere obedience to command usually falls short of what it should be. Anything done out of a sense of duty or necessity is usually not from the heart (cf. 2 Cor. 9:5-7). Consider the parent who makes the child say “I’m sorry” when, in reality, he is not sorry at all. He says it but only to appease his parent.

What It Means To Forgive

Forgiveness involves a kind attitude — abandoning all animosity and hatred. All bitterness, anger, wrath, clamor and evil speaking should be put away (Eph. 4:31). We can hold no grudges. One must deny the impulse to get even and seek to do the forgiven one good.

Forgiveness involves forgetting (Heb. 8:12), but what does it mean to forget? It is impossible for a person to completely obliterate the wrong from his mind. Rather it means to not hold the person accountable for it anymore. When forgiveness is granted that should end the matter. It should never again be dredged up or held against the one who has been forgiven.

One should always be willing to forgive — even at repeated offenses. Matthew 18:21-22 has the apostle Peter asking, “‘Lord, how often shall my brother sin against me, and I forgive him? Up to seven times?’ Jesus said to him, ‘I do not say to you, up to seven times, but up to seventy times seven.'”

Jesus was willing to forgive those who crucified Him, but they were not forgiven until they acknowledged their wrong and repented of it (Luke 23:34; Acts 2:36-39). When one refuses to repent, he is to be regarded as a “heathen and a tax collector to you” (Matt. 18:15-17).

Summarized from Pastor Wiryawan by Karina

Sue Norton lives in Arkansas City, Kansas. She received terrible news during a phone call from her brother in January 1990. Her much beloved, Daddy, Richard Denny and his wife Virginia were found murdered in their home. Sue’s Daddy was shot to death in his isolated Oklahoma farmhouse. The crime netted the killer $17.00 and an old truck.

Sue says she felt “numb”. She couldn’t understand why someone would want to hurt people who were old and poor.

The loss of her Daddy just broke her heart.

Sue sat through the trial of Robert Knighton (B.K.). She was confused about how she should feel. She tells me that everyone in the courtroom was consumed with hate. They all expected her to feel the same way. But she couldn’t hate the way they did because she says, “it didn’t feel good.”

The last night of the trial she knew there must be another way. She couldn’t eat or sleep that night and prayed to God to help her. When morning came, she had this thought. “Sue, you don’t have to hate B.K., you could forgive him”.

The next day, while the jury was out for deliberation, Sue got permission to visit B.K. through the bars of his holding cell. Sue relates, “I was really frightened. This was my first experience in a jail. B.K. was big and tall; he was shackled and had cold steely eyes.” At first B.K. refused to look at Sue. She asked him to turn around and he answered, “Why would anyone want to talk to me after what I have done?” Sue replied, “I don’t know what to say to you. But I want you to know that I don’t hate you. My grandmother always taught me not to use the word hate. She taught me that we are here to love one another. If you are guilty, I forgive you.

B.K. thought Sue was just playing games. He couldn’t understand how she could forgive him for such a terrible crime. Sue says, “I didn’t think of him as killer, I thought of him as a human being.

People thought that Sue had lost her mind. Friends would step to the other side of the road to avoid her. But Sue says, “There is no way to heal and get over the trauma without forgiveness. You must forgive and forget and get on with your life. That is what Jesus would do.

B.K. resides on death row in Oklahoma. Sue often writes to him and visits occasionally. She feels that B.K. should never leave prison, but she does not want him executed. She has become friends with B.K. and because of her love and friendship he has become a devout Christian.

Sue states that some good has come out of her Daddy’s death.

“I have been able to witness to many people about Jesus and forgiveness and helped others to heal. I have brought B.K. and many other men on death row to our Lord Jesus Christ. I live in peace with my Lord!”

Sue Norton is a member of Murder Victims Families for Reconciliation and the Kansas Coalition to Abolish the Death Penalty. Sue has traveled extensively to speak to schools, churches and community groups about forgiveness and Christianity.

Sue gave an eloquent speech to the parole board pleading to save B.K.’s life.  Many of the parole board members were in tears but voted for death.  B.K. was executed by the state of Oklahoma on May 27, 2003.   Bud Welch from Oklahoma City and Aba Gayle from Oregon were both there to support BK and Sue with their loving energy.